New Hampshire has a lot of liberty-related events, and the one I attend most often is the Liberty Forum. This year it was in Manchester and had its usual excellent lineup of speakers. I ran into some people I hadn’t seen in years, as well as seeing writers whom I frequently read, and generally enjoyed it.

There’s quite a range of people at these events, but the atmosphere was friendly and casual, not too different from a science fiction convention. Some people were rabid supporters of single causes; others took a broader, more philosophical or lifestyle-related approach. The events I attended focused more on the latter. David Kelley gave a talk on the importance of philosophy, William Thomas presented the case for limited government, and the Atlas Society had a table. I found out that it’s holding its 2015 summit in Nashua, almost within walking distance of my home. I mentioned this on Twitter with a sigh (which was corrected to a shrug). 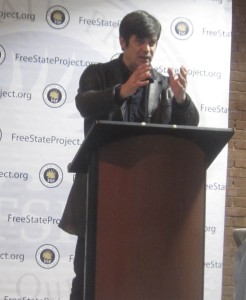 The talk which gave me the most new information was Charlie Arlinghaus’s on New Hampshire history. Knowing how recently New Hampshire had laws on the books requiring the maintenance of Protestant ministers (though they weren’t enforced) gives some perspective.

Most of the people there didn’t have the level of technical savvy I often take for granted, and the tech items I attended weren’t very impressive. The presentation on “Cryptography in one lesson” was good but didn’t tell me anything new, being aimed at a general audience. A presentation on “How activists solve problems in the digital age” sounded like a sales pitch for Google, and when the speaker used the words “It’s not as good as Outlook” for something other than eating camel dung, I gave up and left. But I had fun hanging around the Think Penguin booth. These people sell interesting stuff, including a router with completely open-source firmware. I may get back to them at some point.

There were a couple of closing items today (Sunday), but I didn’t go back for them. It was an enjoyable conference and I’m looking forward to the next one.