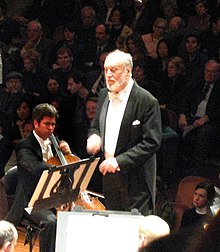 Today I learned that conductor Kurt Masur has died. It always saddens me to learn about the loss of a major musician, but I’ll admit I’m not a connoisseur of conductors. Unless a performance is really out of the ordinary or noticeably sloppy, I don’t notice the difference, except for a few bits of interpretation which I’m fussy about. On that point, Masur doesn’t pass my Beethoven’s Ninth test (the passage at measure 513, as Toscanini knew, is a juggernaut, not a funeral march!). But no matter; in reading about him, I learned something much more important.

In 1970, Masur became director of the Gewandhaus Orchestra in Leipzig, then in East Germany. In 1989 he and the Gewandhaus played a key role in opening up the country. The Independent tells the story:

Masur’s own moment came eight years later, when huge crowds again massed in front of the Gewandhaus. It was 9 October 1989, two days after President Gorbachev had been in East Germany to celebrate the 40th anniversary of the GDR, and 70,000 Leipzigers had taken to the streets in protest. It was unprecedented. Honecker had warned them in a television broadcast to remember Tiananmen Square, but still they came.

And Masur took the critical decision – perhaps the single most decisive gesture in the run of events that brought down the GDR – to open the Gewandhaus doors and let the protesters in for the first open political debate East Germany had ever known.

Sitting in his Gewandhaus office, I asked Masur how he came to make that decision. Wasn’t he terrified of the consequences?

‘Of course. No one knew what would happen, and I had only some minutes to decide – at the risk of everything I have here; of, perhaps, great danger. But I also knew that if I didn’t do something I would regret it for the rest of my life. I was here in this chair, and I got a message from the church – a boy came to me: ‘Mr Masur, you know there is a police order to beat this demonstration down.’ And this was a clear message: they would shoot. I phoned my wife and said, I think I have to intervene. She said OK. So I opened the doors. The police didn’t come in. They didn’t know what my relationship with the government was, but they knew I was a friend of Honecker. So they stayed outside.’

Opening the doors not only rang the death knell of the GDR but boosted Masur’s credit on all fronts.

Leipzig was one of the places I visited on my first trip to Germany, in 1999. I chose it for its musical connections and was impressed by how much it had come to life; the railroad station was now full of shops, and I came upon an impromptu street concert of peace songs. In part, I have Masur to thank for that.

Addendum: In exploring works directed by Masur, I came across Mendelssohn’s Die erste Walpurgisnacht, a light-hearted cantata of pagan religious freedom, and I love it. It’s on Naxos Music Library, which is subscription-only, so a link wouldn’t help, but here’s the German text.