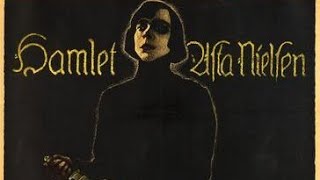 Fortunately, there were no commercials when I watched the 1921 Hamlet last night. The production is by Dane Asta Nielsen, who plays the title role, but fortunately (for me, anyway) the intertitles are in German rather than Danish. In this version, Hamlet is a woman. When she was born, her mother received an incorrect report that the king had died in battle, so she announced that a son had been born in order to have a successor to the throne. Hamlet is raised as a man, and only her parents and some servants know the secret. She falls in love with Horatio, and her alternating courtship and abuse of Ophelia is intended to keep her away from Horatio. There’s no overt ghost; Hamlet thinks she hears her father’s voice, but it’s most likely a hallucination. There are some other changes, but the story generally follows Shakespeare’s outline. It’s a strange but interesting version. The visual quality isn’t great, but it’s enough to see that a good job was done on settings and costumes.

Here’s an extensive discussion of the movie.